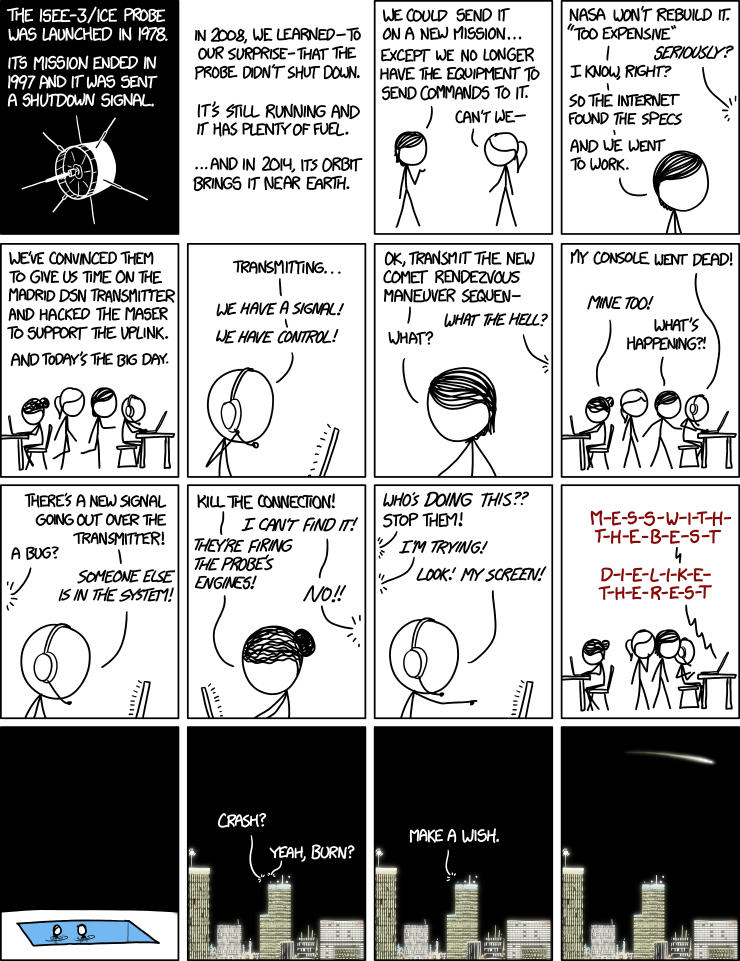 [[A white-on-black drawing of the ISEE-3

ICE probe was launched in 1978. Its mission ended in 1997 and it was sent a shutdown signal.

In 2008, we learned–to our surprise–that the probe didn’t shut down. It’s still running and it has plenty of fuel. …and in 2014, its orbit brings it near Earth.

Figure 1: We could sent it on a new mission… except we no longer have the equipment to send commands to it.

[[Camera frame closes in slightly on the first figure.]]

Figure 2: I know, right? So the internet found the specs and we went to work.

[[Camera zooms out as the two figures walk through an area with two other figures seated at desks working on laptops; one of the seated figures is wearing a headset.]]

Figure 1: We’ve convinced them to give us time on the Madrid DSN transmitter and hacked the maser to support the uplink. And today’s the big day.

[[Camera focuses on the figure with the headset.]]

Headset Operator 1: Transmitting… We have a signal! We have control!

[[Camera flips back to the first figure.]]

Off screen: What the hell?

[[Camera zooms back out to show all four figures.]]

[[Camera back to figure with headset, staring at screen.]]

Headset Operator 1: There’s a new signal going out over the transmitter!

Headset Operator 1: Someone else is in the system!

[[Camera switches to the second operator.]]

Headset Operator 1 (from offscreen): I can’t find it!

Headset Operator 1 (from offscreen): No!!

[[Camera switches back to the headset operator.]]

Figure 1 (from offscreen): Who’s doing this?? Stop them!

[[The camera zooms back to show all of them, and a message is being shown on the headset operator’s screen, in red.]]

[[Camera cuts to a pool with two figures in it.]]

[[Camera zooms out to show that the pool is on the roof of a downtown building. We see the figures’ speech coming from it.]]

[[A meteor passes through the sky above the city skyline.]]