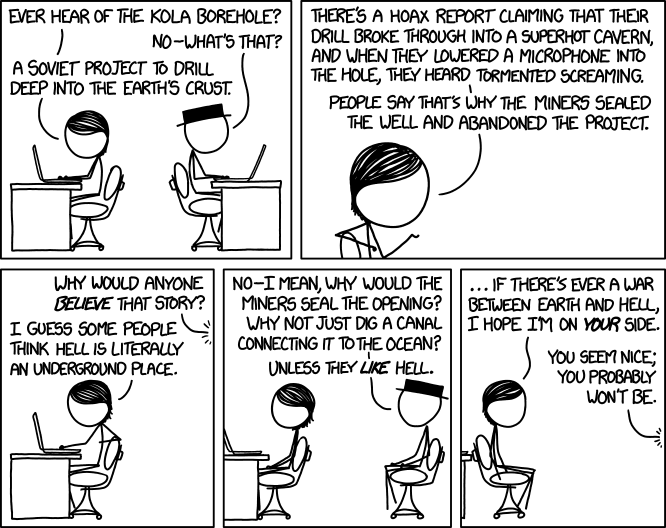 [[A woman and black hat guy sit at desks, their backs to each other, each using a laptop.]]

Woman: Ever hear of the Kola borehole?

Woman: A Soviet project to drill deap into the earth’s crust.

[[The woman turns around; we see her head and shoulders.]]

Woman: There’s a hoax report claiming that their drill broke through into a superhot cavern, and when they lowered a microphone into the hole, they heard tormented screaming. People say that’s why the miners sealed the well and abandoned the project.

[[The woman turns back to her laptop.]]

Black hat guy: Why would anyone believe that story?

Woman: I guess some people think Hell is literally an underground place.

[[Black hat guy turns around and addresses the woman.]]

Black hat guy: No - I mean, why would the miners seal the opening? Why not just dig a canal connecting it to the ocean? Unless they like Hell.

[[The woman turns back around.]]

Woman: … If there’s ever a war between earth and Hell, I hope I’m on your side.

Black hat guy: You seem nice; you probably won’t be.