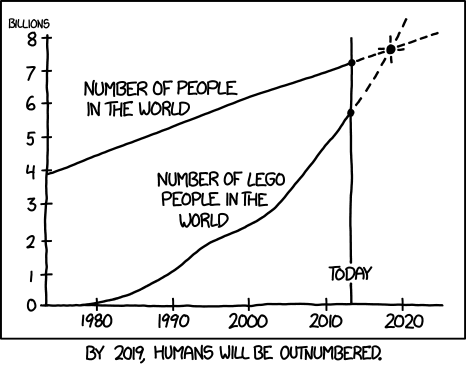 [A graph. The vertical axis is labeled ‘billions’ and goes from 0 to 8 in increments of one. The horizontal axis has years from 1970 to 2020 in increments of 10. A vertical line at 2013 is marked ’today’. The first measurement, ’number of people in the world’ begins at 1980 at just under 4 billion and steadily increases to today’s 7 billion. The second measurement is a gradual incline marked ’number of LEGO people in the world’, which begins just before 1980 at 0, gets to around 2 billion by the mid-90s, and increases to around 5.5 billion today. Both figures are projected past today’s measurements as dashed lines and meet at a point in 2019.]]