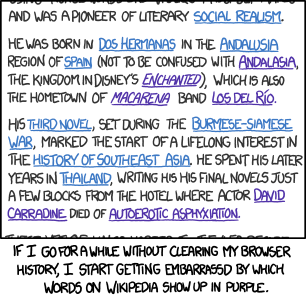 ((the following is in the standard format of a wikipedia article, modified to reflect the content of the comic))

..and was a pioneer of literary [[social realism]].

His [[third novel]], set during the [[Burmese-Siamese war]], marked the start of a lifelong interest in the [[history of Southeast Asia]]. He spent his later years in [[Thailand]], writing his final novels just a few blocks from the hotel where actor [[David Carradine]]((link clicked)) died of [[Autoerotic Asphyxiation]] ((link clicked)).