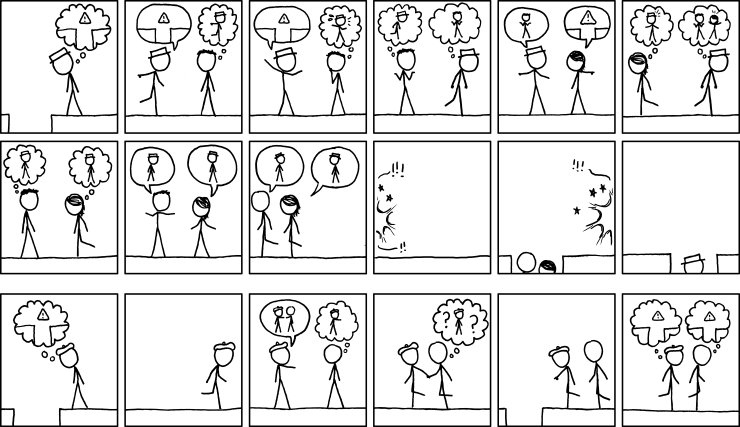 [[A guy in a hat looks down at a large gap in the walkway; a thought bubble with a warning symbol and an image of the gap appears above the guy’s head.]]

[[The guy walks to the right, away from the gap, and encounters another guy, to which he speaks (in iconographic speech bubble form), attempting to inform him about the gap. A thought bubble appears above the other figure’s head with an image of the gesturing guy.]]

[[The second guy shrugs in a nonplussed manner, and the first guy leaves off the right side of the frame. Both have thought bubbles displaying the other’s reaction.]]

[[The first guy continues to the right and comes across a woman. He tells her about the reaction of the previous guy (again in iconographic form); she simultaneously tries to tell him about a gap and gestures off to the right of the frame.]]

[[The first guy and the woman both leave the frame thinking of each other’s reactions; the woman exiting left and the guy exiting right.]]

[[The pair talk about the first guy.]]

[[The pair continue talking about the first guy as they exit the frame to the left.]]

[[A commotion is heard from the left.]]

[[The camera pans over to the left, where the pair have fallen into a gap in the walkway. A commotion is then also heard from the right.]]

[[The camera pans over to the right, where the first guy has also fallen into a gap.]]

[[A third guy in a beret comes across a gap in the walkway.]]

[[The guy in the beret runs off the frame to the right.]]

[[The guy in the beret leads the fourth guy to the gap and shows him it.]]

[[Both the guy in the beret and the fourth guy walk away from the gap to the right, now both thinking about the gap.]]