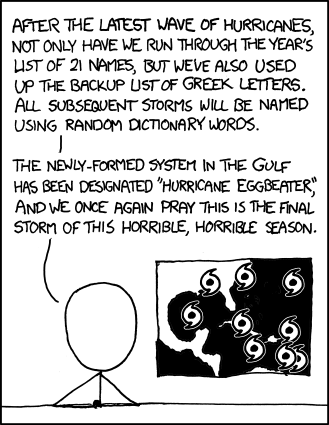 [[A weather reporter sits behind a desk with an image of the Gulf of Mexico and surrounding land masses displayed to his left. 9 hurricane symbols are scattered across the map, primarily over Cuba.]]

Reporter: After the latest wave of hurricanes, not only have we run through the years lit of 21 names, but we’ve also used up the backup list of Greek letters. All subsequent storms will be named using random dictionary words.

Reporter: The newly-formed system in the gulf has been designated “Hurricane Eggbeater”, and we once again pray this is the final storm of this horrible, horrible season.