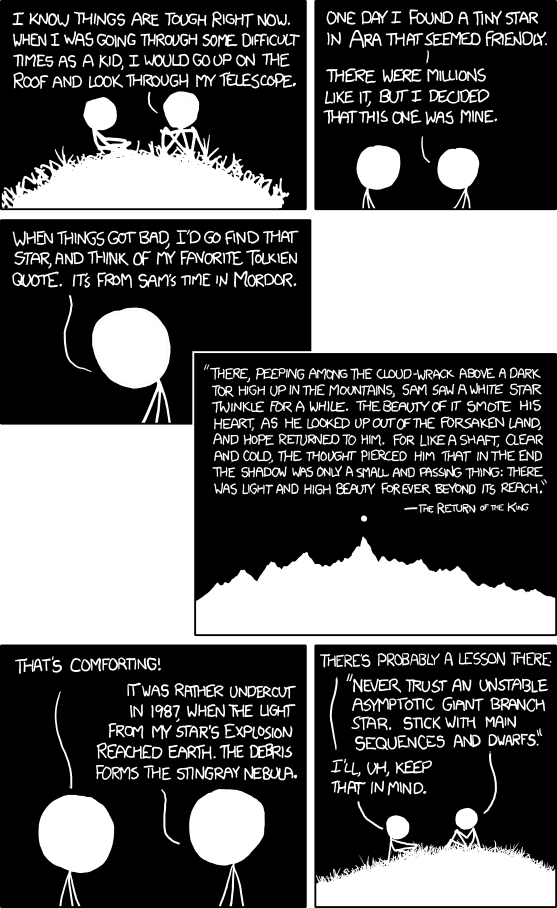 [[Two white figures are silhouetted against a dark sky. They’re sitting on top of a grassy hill.]]

Person: I know things are tough right now. When I was going through some difficult times as a kid, I would go up on the roof and look through my telescope.

Person: One day I found a tiny star in Ara that seemed friendly.

Person: There were millions like it, but I decided that this one was mine.

Person: When things got bad, I’d go find that star, and think of my favorite Tolkien quote. It’s from Sam’s time in Mordor.

((The next panel is diagonally downward to the right of the previous. The upper left corner overlaps.))

[[A star is above the highest peak in a chain of mountains.]]

“There, peeping among the cloud-wrack above a dark tor high up in the mountains, Sam saw a white star twinkle for a while. The beauty of it smote his heart, as he looked up out of the forsaken land, and hope returned to him. For like a shaft, clear and cold, the thought pierced him that in the end the shadow was only a small and passing thing: There was light and high beauty forever beyond its reach.”

Person: It was rather undercut in 1987, when the light from my star’s explosion reached Earth. The debris forms the Stingray Nebula.

Companion: There’s probably a lesson there.