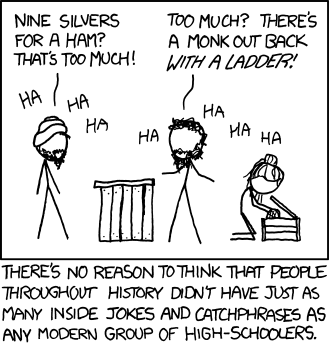 [[Two men with beards stand at a crude wooden counter, one is wearing a turban. Behind the man without a turban is a woman kneeling on the ground and putting something into a box.]]

Turban man: Nine silvers for a ham? That’s too much!

No-turban: Too much? There’s a monk out back

There’s no reason to think that people throughout history didn’t have just as many inside jokes and catchphrases as any modern group of high-schoolers.