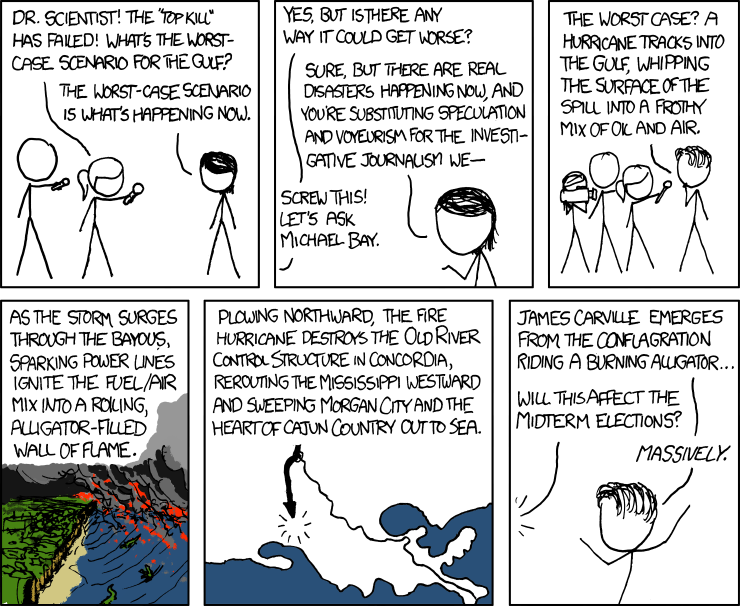 [[Two reporters, a man and a woman, point microphones toward a scientist.]]

Female reporter: Dr. Scientist! The “Top Kill” has failed! What’s the worse-case scenario for the gulf?

Reporter, out of frame: Yes, but is there any way it could get worse?

Dr. Scientist: Sure, but there are real disasters happening now, and you’re substituting speculation and voyeurism for the investigative journalism we–

[[The reporters, now joined by a camerawoman, approach Michael Bay with their microphones.]]

Michael Bay: The worst case? A hurricane tracks into the gulf, whipping the surface of the spill into a frothy mix of oil and air.

[[An alligator-filled conflagration atop a massive ocean wave approaches land.]]

Michael Bay, narrating: As the storm surges through the bayous, sparking power lines ignite the fuel

air mixture into a roiling, alligator-filled wall of flame.

Michael Bay, narrating: Plowing northward, the fire hurricane destroys the Old River Control Structure in Concordia, rerouting the Mississippi westward and sweeping Morgan City and the heart of cajun country out to sea.

Reporter, out of frame: Will this affect the midterm elections?