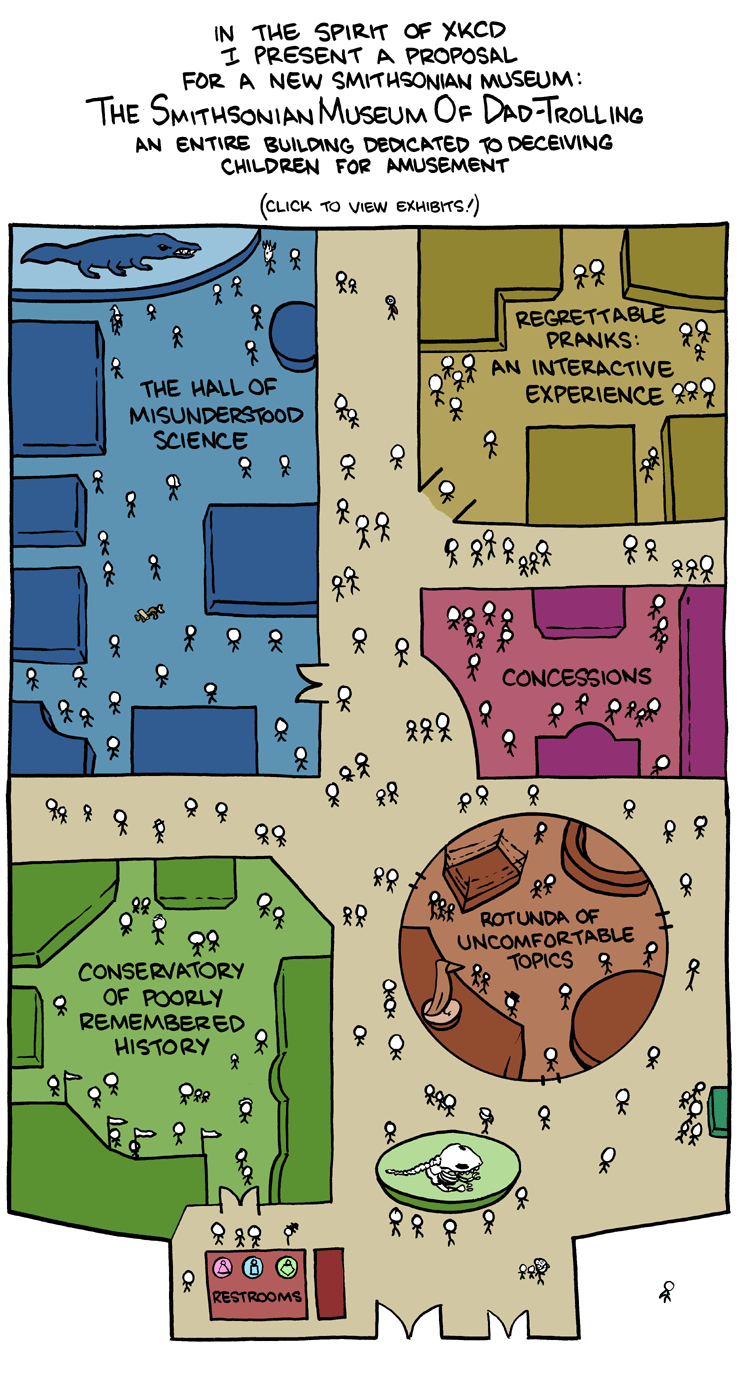 ((This comic was drawn by Zach Weiner of Saturday Morning Breakfast Cereal. It’s a floor plan of a museum with five main halls. Each hall contains several exhibits. If you click on an exhibit’s spot on the map, a comic pops up showing a view of the exhibit. The museum map is full of tiny stick figures, many of them characters from xkcd.))

In the spirit of xkcd I present a proposal for a new Smithsonian museum:

The Smithsonian Museum Of Dad-Trolling

An entire building dedicated to deceiving children for amusement

[[The top left room is ‘The Hall of Misunderstood Science’. It contains six exhibits.]]

[[Exhibit: Four magnets hang from a square arch. A child is touching two of them together.]]

Text on the arch: Magnets only leap at each other when they’re teenagers. Later, they lose interest.

[[Exhibit: A child on his dad’s shoulders looks up at a looming statue of Jesus behind a lectern. There are flakes falling from Jesus onto them both.]]

Exhibit label: Snow is Jesus’ dandruff. His scalp gets dry when it’s cold.

[[Exhibit: A child lies asleep, while hands and a scary face reach up around the bed toward him.]]

[[Exhibit: An ice block sits on a stand in front of pictures of a wolf and rhinoceros looking frightened.]]

[[Exhibit: An insect on a stick is orbited by a small sphere.]]

Exhibit label: Anti-matter: Matter that is more than 50% ants.

Exhibit label: DNA only has four letters because the alphabet was smaller back then.

Dad, to child: Told you so.

[[Exhibit: A bunch of molecules hang from the ceiling.]]

Exhibit label: Molecules? In my day, we only had atoms!

[[The top right room is ‘Regrettable Pranks: An Interactive Experience’. There are four exhibits.]]

[[Exhibit: Five balloons float tethered to a table. A child is holding a sixth balloon. The Dad looks alarmed.]]

Sign on exhibit: If this helium makes your voice go higher, it’s because you’re ten seconds from exploding.

[[Exhibit: An alien face is shown above an outline of several hands next to a ruler. A child holds his hand up to it.]]

Sign on exhibit: Measure your middle finger. If it’s longer than the others, you’re an alien halfbreed.

[[Exhibit: Three cups are on a table. A child is walking away with a fourth cup, the dad’s arm around the child’s shoulder.]]

Exhibit label: Has anyone seen my rabbit brain? It looks like a cherry, and I dropped it in a Jello cup.

[[Exhibit: A monstrous set of jaws open upward around a bed.]]

Sign on exhibit: Make your bed or monsters will know a kid lives there.

[[The center right room is ‘Concessions’. There are three booths.]]

[[Booth: A concession stand is labeled ‘KFP’, and displays a KFC-style bucket. A dad and child are eating.]]

Sign on stand: Ground beef: Beef we found on the ground.

Dad, to child: Told you.

Subtitle: How did you think it was spelled?

Sign on booth: Now with more of the goo in your eyes. Same as every other creamery.

[[The lower left room is ‘Conservatory of Poorly Remembered History’. There are five exhibits.]]

[[Exhibit: A criminal in front of some windows.]]

Exhibit label: The Crimean War: The first war against crime.

[[Exhibit: A castle with flags hanging on it.]]

Subtitle: Long story short, the wizards were in control.

Exhibit label: Star Wars is a documentary. No, seriously.

Dad, to children: Kids, this man is a veteran.

[[The lower right room is ‘Rotunda of Uncomfortable Topics’. There are five exhibits.]]

[[Exhibit: A wrestling ring, with a man and woman mostly obscured by the exhibit label.]]

[[Exhibit: a figure sits at a booth in front of a bowl of food. The dad is holding a bottle.]]

Exhibit label: Alcohol is poison. I drink to save you from it.

Sign on exhibit: Grandma’s not dead. She just returned to saturn. For REVENGE.

[[In the areas outside the rooms, there are two more exhibits and restrooms, all clickable.]]

Exhibit label: That’s right. Dinosaurs were made entirely of BONES.

Dad, to kid: If you think about it, it makes sense.

[[Exhibit: A large image hangs on the wall. It is a dense squiggly jumble of lines.]]

[[Restrooms: There are three doors, each with a sign.]]