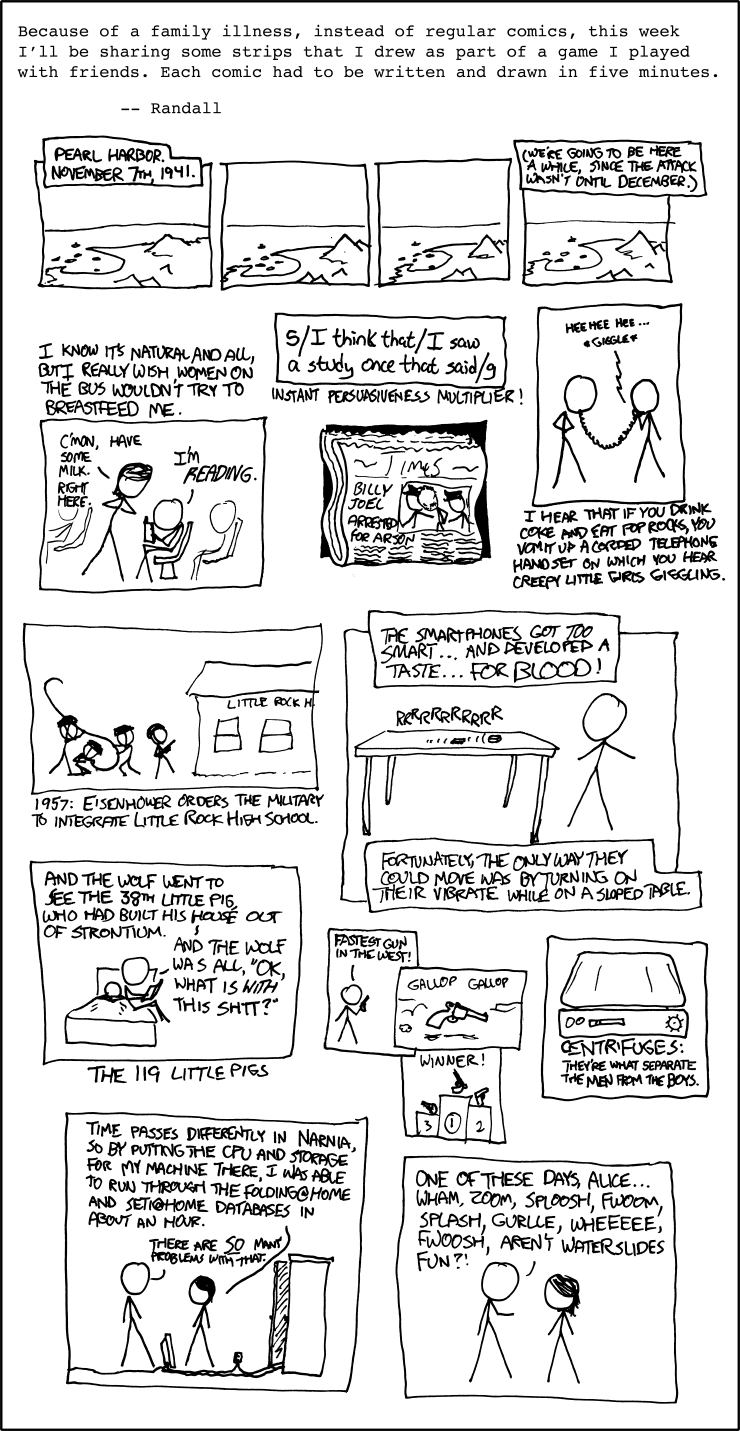 Because of a family illness, instead of regular comics, this week I’ll be sharing some strips that I drew as part of a game I played with friends. Each comic had to be written and drawn in five minutes.

[[There is a beach, with some ships floating in a crescent shaped harbor.]]

[[The boats continue to move about the harbor.]]

[[The boats do their thing. A title explains.]]

(We’re going to be here a while, since the attack wasn’t until December.)

I know it’s natural and all, but I really wish women on the bus wouldn’t try to breastfeed me.

I saw a study once that said that

[[A newspaper front page. Billy Joel is between two policemen.]]

[[One person has a cord leaving their mouth, the other is holding a handset on the end of it to their ear.]]

I hear that if you drink coke and eat pop rocks, you vomit up a corded telepohen handset on which you hear creepy little girls giggling.

[[Three soldiers are holding a large integral sign, while a fourth points a gun at the Little Rock High School.]]

[[A smartphone is vibrating across a table, towards a person.]]

smart… and developed a taste… for BLOOD!

Fortunately, the only way they could move was by turning on their vibrate while on a sloped table.

[[A person is reading to their child.]]

Person: And the wolf went to see the 38th little pig, who had built his house out of strontium.

Person: And the wolf was all, “Ok, what is

Person: Fastest gun in the west!

[[The gun is galloping across the desert.]]

[[There is a podium, with a gun in each position.]]

[[A picture of a centrifuge dominates the panel.]]

They’re what separate the men from the boys.

[[A computer monitor is plugged in, and cables run into a closet.]]

Lucy: Time passes differenly in Narnia, so by putting the CPU and storage for my machine there, I was able to run through the Folding@Home and Seti@Home databases in about an hour.

Peter: There are so many problems with that.

[[Someone is talking to Alice.]]