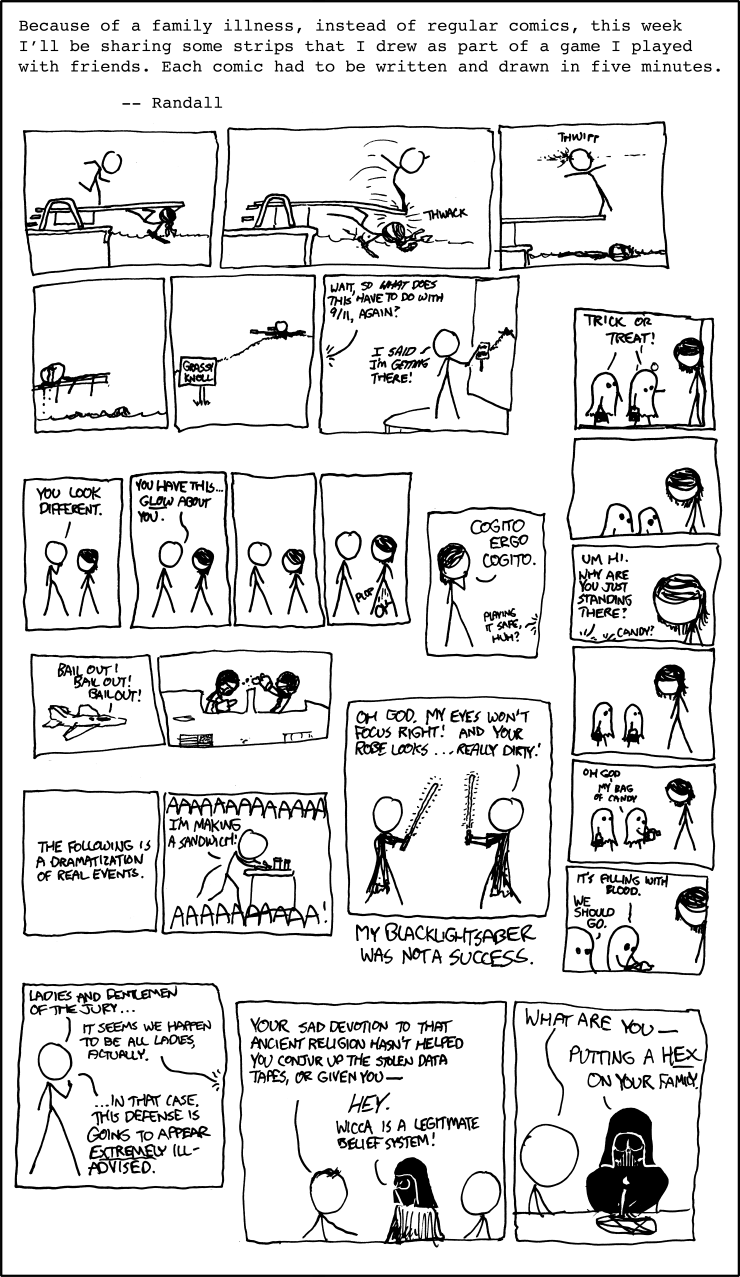 Because of a family illness, instead of regular comics, this week I’ll be sharing some strips that I drew as part of a game I played with friends. Each comic had to be written and drawn in five minutes.

((A series of comics are arrayed haphazardly. They will be tackled top to bottom, left to right, approximately. Strips will be separated by two new lines.))

[[A ninja is hiding under a diving board as a man runs along it.]]

[[The man jumps on the end of the board and hits the ninja in the head, knocking him into the pool.]]

[[The ninja floats in the water. A bullet passes through the man’s head.]]

[[The man is lying bleeding on the diving board, the ninja is still unconscious on the pool.]]

[[A sniper is at the top of a hill. The sign in front of the hill says “Grassy Knoll”.]]

[[Someone is pointing at the diagram of the previous panel.]]

does this have to do with 9

Man: You have this… glow about you.

[[Two ghosts are standing in front of a woman at a door, each carrying a bag. They are children dressed up.]]

Child: Um hi. Why are you just standing there?

[[Another silent panel as the children stare up at the woman.]]

[[The second child looks in their bag.]]

Other Child: Oh God, my bag of candy.

Other Child: It’s filling with blood.

Child: We should go.

[[A jet is flying across the panel.]]

[[The pilot and copilot have buckets, and are bailing water out of the cockpit.]]

The following is a dramatization of real events.

[[A person is at a counter, with several jars.]]

My blacklightsaber was not a success.

Person: Ladies and gentlemen of the jury.

Off-screen voice: It seems we happen to be all ladies, actually.

Person: … in that case, this defense is going to appear extremely ill-advised.

[[Darth Vader is sitting between two people, at a table.]]

Person: Your sad devotion to that ancient religion hasn’t hleped you conjur up the stolen data tapes, or given you –

Wicca is a legitimate belief system!

[[Darth Vader is drawing a pentagram on the table.]]

Person: What are you –

Darth Vader: Putting a hex on your family.