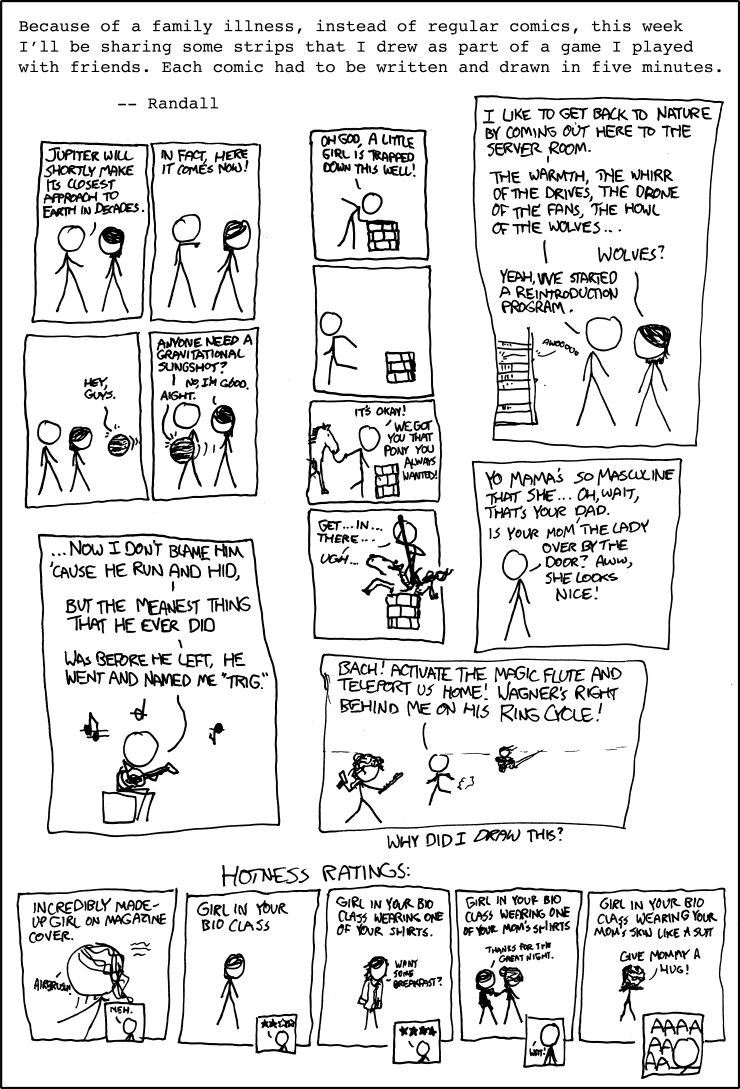 Because of a family illness, instead of regular comics, this week I’ll be sharing some strips that I drew as part of a game I played with friends. Each comic had to be written and drawn in five minutes. – Randall

[[A man and a woman stand facing each other.]]

Man: Jupiter will make its closest approach to Earth in decades.

[[Jupiter, about the size of the characters’ heads, hovers into the frame at about head-height.]]

[[Jupiter continues to hover through the frame as the characters watch it go.]]

Jupiter: Anyone need a gravitational slingshot?

Man: …Now I don’t blame him ‘cause he ran and hid, – but the meanest thing that he ever did – was before he left, he went and named me “Trig.”

Man: Oh God, a little girl is trapped down this well!

Man: It’s okay, we got you that pony you always wanted!

[[He tries to cram the pony down the well with the aid of a large stick.]]

Man: I like to get back to nature by coming out here to the server room. – The warmth, the whirr of the drives, the drone of the fans, the howl of the wolves…

[[A man stands by himself in the frame.]]

Man: Yo momma’s so masculine that she… oh, wait, that’s your dad. – Is your mom the lady over by the door? Aww, she looks nice!

[[A man runs toward another man who is wearing a powdered wig, holding a gun in one hand, and a flute in the other. Behind him, someone is chasing him on a motorcycle.]]

Man: Bach, activate the magic flute and teleport us home! Wagner’s right behind me on his Ring Cycle!

Girl in your bio class.

Girl in your bio class wearing one of your shirts.

[[Girl with another sort of shirt speaking to an older lady.]]

Girl in your bio class wearing one of your mom’s shirts.

Girl: Thanks for the great night.

Girl in your bio class wearing your mom’s skin like a suit.

Girl: Give Mommy a hug!