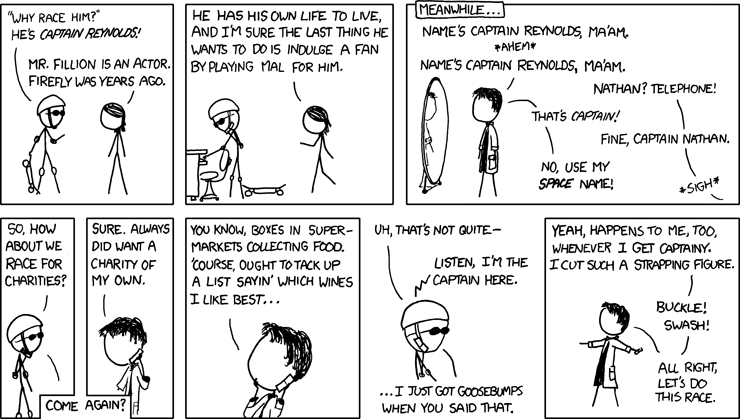 [[Man with skateboard and gear and woman are talking]]

Woman: Mr. Fillion is an actor. Firefly was years ago.

[[They go over to a computer; the man is using a phone and presumably looking up a phone number]]

Woman: He has his own life to live, and I’m sure the last thing he wants to do is indulge a fan by playing Mal for him.

Nathan: No, use my space name!

[[Nathan and the skateboarder talk on the phone]]

Skateboarder: So, how about we race for charities?

Nathan: Sure. Always did want a charity of my own.

Text between them: Come again?

Nathan: You know, boxes in supermarkets collecting food. ‘Course, ought to tack up a list sayin’ which wines I like best…

Skateboarder: Uh, that’s not quite…

Skateboarder: …I just got goosebumps when you said that.

Nathan: Yeah, happens to me too whenever I get captainy. I cut such a strapping figure. Buckle! Swash! All right, let’s do this race.