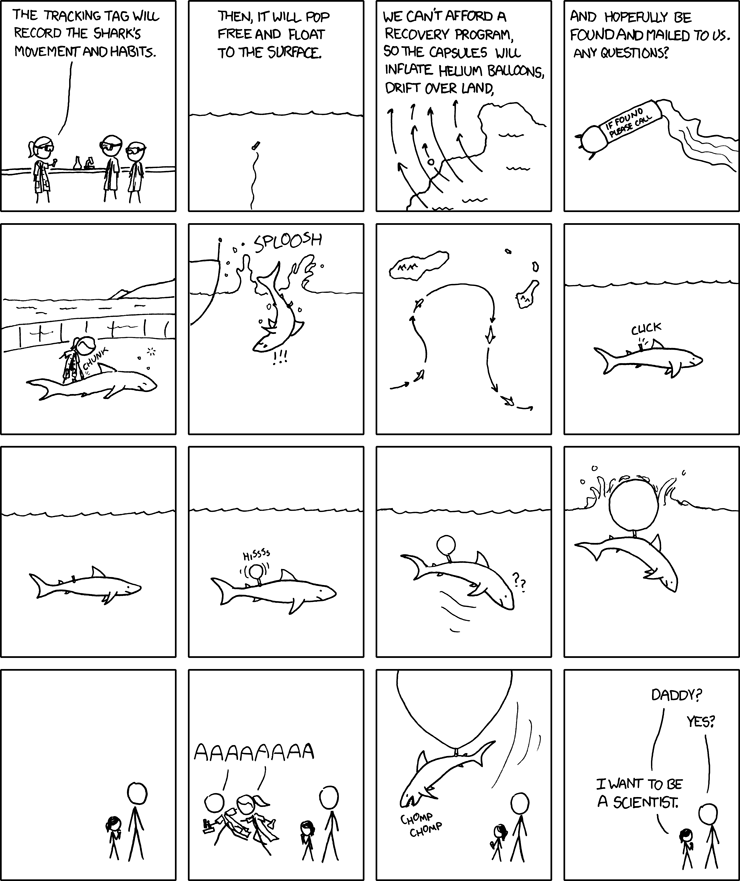 [[A group of scientists with goggles and labcoats stand around a pair of beakers.]]

Scientist: The tracking tag will record the shark’s movement and habits.

Scientist: Then, it will pop free and float to the surface.

[[A coast is shown, with arrows directed from water to land.]]

Scientist: We can’t afford a recovery program, so the capsules will inflate helium balloons, drift over land,

Scientist: And hopefully be found and mailed to us. Any questions?

[[The scientist is standing over a groggy shark.]]

[[The shark is dropped off a boat, into the water.]]

[[The course of the shark is shown, weaving around islands.]]

[[The capsule is shown stickign out of the shark.]]

[[The capsule remains attached to the shark.]]

[[The balloon starts to inflate, still attached to the shark and underwater.]]

[[As the balloon inflates, it starts to pull the shark to the surface.]]

[[The balloon breaks the surface, pulling the shark with it.]]

[[A man and a child are standing together.]]

[[Two scientists run past, screaming. One is holding a microscope.]]

[[A shark attached to a huge balloon floats past following the scientists.]]

Child: I want to be a scientist.