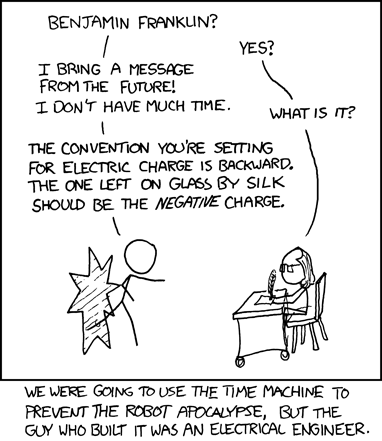 [[Guy steps out of rift. Benjamin Franklin is sitting at his desk with quill and parchment.]]

Guy: I bring a message from the future! I don’t have much time.

Franklin: What is it?

Guy: The convention you’re setting for electric charge is backward. The one left on glass by silk should be the negative charge.

{{Caption: We were going to use the time machine to prevent the robot apocalypse, but the guy who built it was an electrical engineer.}}

{{Mouseover: Sure, we could stop dictators and pandemics, but we could also make the signs on every damn diagram make sense.}}