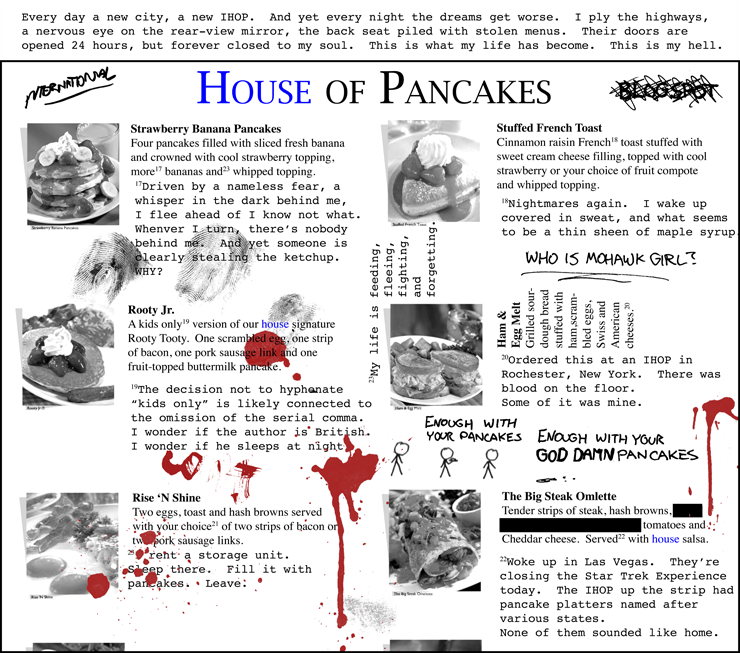 {{All instances of the word “House” are in blue.}}

Every day a new city, a new IHOP. And yet every night the dreams get worse. I ply the highways, a nervous eye on the rear-view mirror, the back seat piled with stolen menus. Their doors are opened 24 hours, but forever closed to my soul. This is what my life has become. This is my hell.

[17] Driven by a nameless fear, a whisper in the dark behind me, I flee ahead of I know not what. Whenver I turn, there’s nobody behind me. And yet someone is clearly stealing the ketchup. WHY?

[[The footnote is covered in fingerprints.]]

[[The above note is sandwiched in sideways in between the Stuffed French Toast and Ham and Egg Melt.]]

A kids only [19] version of our house signature Rooty Tooty. One scrambled egg, one strip of bacon, one pork sausage link and one fruit-topped buttermilk pancake.

[19] The decision not to hyphenate “kids only” is likely connected to the omission of the serial comma. I wonder if the author is British. I wonder if he sleeps at night.

[[The following passages are have a red substance underneath them, probably ketchup.]]

Two eggs, toast and hash browns served with your choice [21] of two strips of bacon or two pork sausage links.

[21] {{illegible}} rent a storage unit. Sleep there. Fill it with pancakes. Leave.

[18] Nightmares again. I wake up covered in sweat, and what appears to be a thin sheen of maple syrup

{{Handwritten, underlined}} WHO IS MOHAWK GIRL?

[20] Ordered this in at an IHOP in Rochester, New York. There was blood on the floor. Some of it was mine.

Enough with your pancakes.

Enough with your GOD DAMN pancakes.

[22] Woke up in Las Vegas. They’re closing the Star Trek Experience today. The IHOP up the strip had pancake platters named after various states.