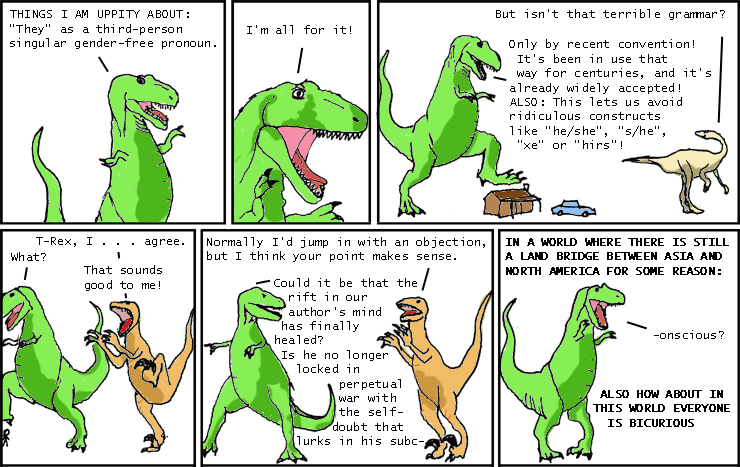 T-Rex: THINGS I AM UPPITY ABOUT: “They” as a third-person singular gender-free pronoun.

Dromiceiomimus: But isn’t that terrible grammar?

T-Rex: Only by recent convention! It’s been in use that way for centuries, and its use is widely accepted! ALSO: this lets us avoid ridiculous constructs like “he

Utahraptor: That sounds good to me!

Utahraptor: Normally I’d jump in with an objection, but I think your point makes sense.

T-Rex: Could it be that the rift in our author’s mind has finally healed? Is he no longer locked in perpetual war with the self-doubt that lurks in his subc-

Narrator: IN A WORLD WHERE THERE IS STILL A LAND BRIDGE BETWEEN ASIA AND NORTH AMERICA FOR SOME REASON:

Narrator: ALSO HOW ABOUT IN THIS WORLD EVERYONE IS BICURIOUS