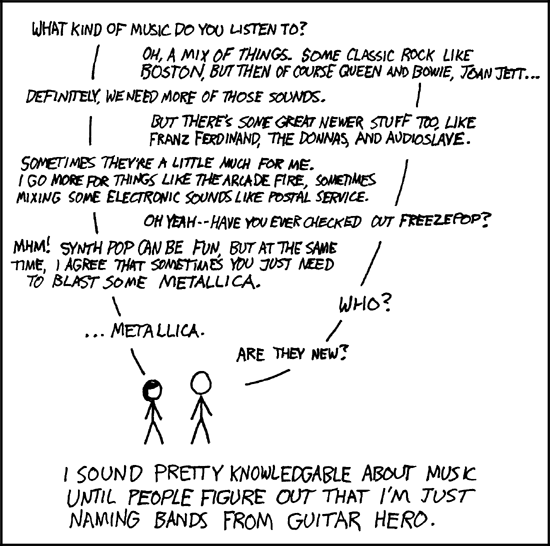 [[A female and male figure converse]]

Female: What kind of music do you listen to?

Male: Oh, a mix of things. Some classic rock like Boston, but then of course Queen and Bowie, Joan Jett…

Female: Definitely, we need more of those sounds.

Male: But there’s some great newer stuff too, like Franz Ferdinand, The Donnas, and Audioslave.

Female: Sometimes they’re a little much for me. I go more for things like The Arcade Fire, sometimes mixing some electronic sounds like Postal Service.

Male: Oh yeahâhave you ever checked out Freezepop?

Female: Mhm! Synth pop can be fun, but at the same time, I agree that sometimes you just need to blast some Metallica.

Male: Are they new?

Narrator: I sound pretty knowledgeable about music until people figure out that I’m just naming bands from Guitar Hero.